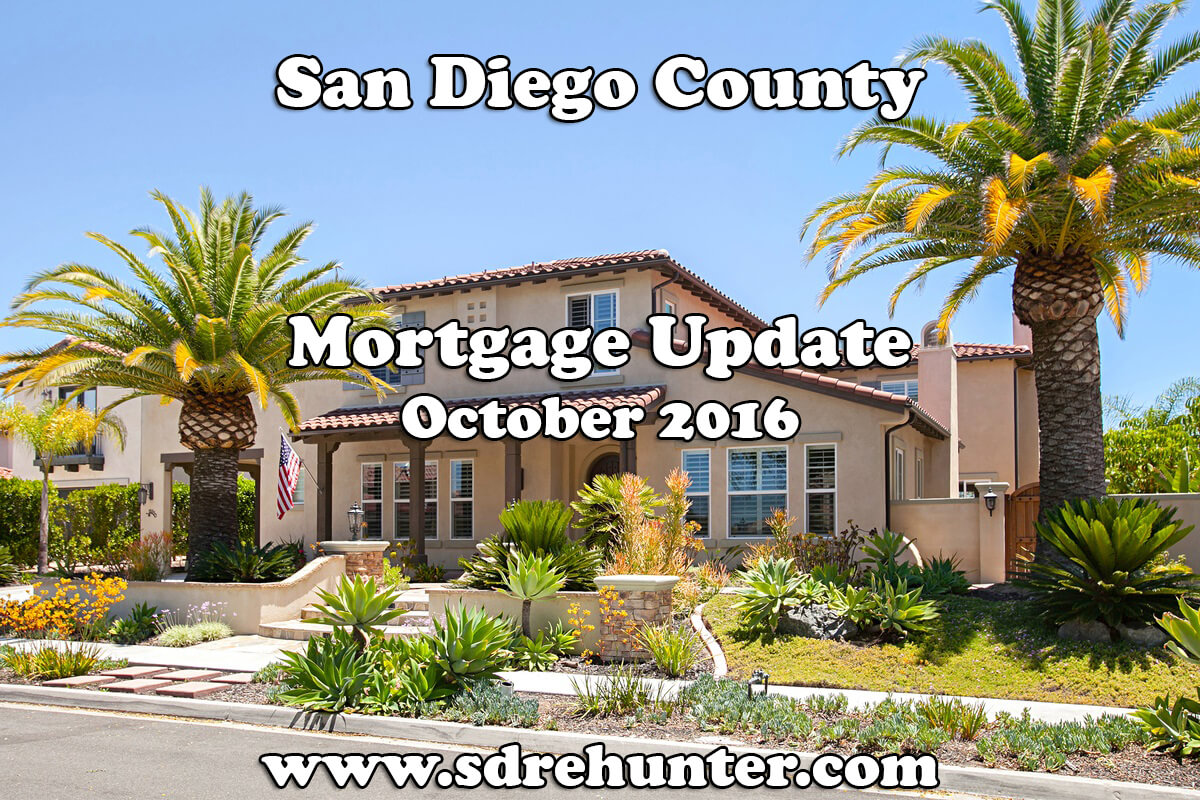 Continuing on from September, the mortgage forecast for San Diego in October sets the stage for borrowers to take advantage.

The San Diego market saw an increase of $26,500 (5%) in median home sales over the past year and the average price per square foot for this same period rising to $385 from $362.

Despite this, the mortgage rates and forecast for October still seems to be in favor of borrowers looking to get low rates.

Let’s go through the numbers with the October mortgage forecast and see what we’re dealing with.

Per the HSH site, the current mortgage rates for San Diego, California are only up a slight amount from September.

At present, a 30-year fixed rate mortgage has an interest rate of 3.68% while the national average is down by a noticeable amount.

For a 15-year fixed-rate mortgage the interest rate is 3.03%

A 30-year fixed-rate mortgage (FRM) averaged 3.42%, and held an average 0.5 point for the week ending the month of September.

It is down from last week which averaged 3.48%.

By comparison, and as mentioned before, the 30-year fixed-rate mortgage in San Diego, California is 3.68%. 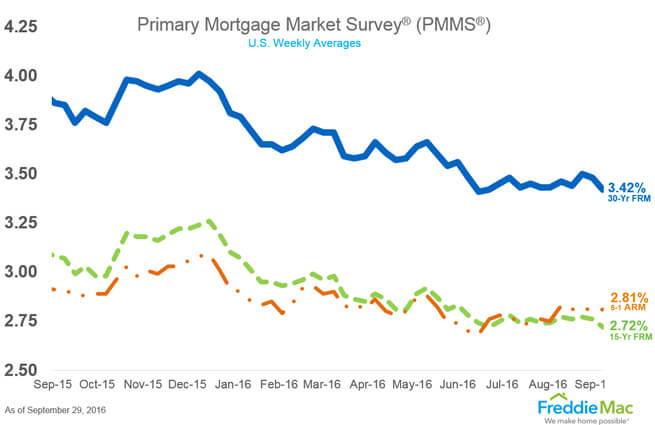 The same time this year, the 15-year fixed-rate mortgage rate averaged 3.85% - you can see a decrease on all sides from past numbers.

By comparison, a 15-year fixed-rate mortgage in San Diego, California was 3.03%, which is slightly higher than the national average.

A 5-year Treasury-indexed hybrid adjustable-rate mortgage (ARM) averaged 3.07%, with an average 0.4 point up from last week when it averaged 2.80%.

Where are the rates headed?

Looking back at Bankrate’s mortgage rate trend index for the week of September 29, 2016 – October 5, 2016, 16.7% of the panellists predict that mortgage rates will rise over the next week or so.

However, 25% think rates will fall.

The majority at 58.3% believe rates will remain relatively unchanged; plus or minus 2 basis points or so.

Judging from the current mortgage rates, the increase in the San Diego market has been very minor in most cases.

If the majority vote is anything to go off of, than mortgage rates for San Diego, and national mortgage rates, will remain largely unchanged.

Blog Post Interrupt – What is a “No Cost” Loan?

How is the job market doing?

The unemployment rate has dropped by 5 percent since 2010, with 13 million new jobs added during this time.

San Diego has seen a modest job boom in the last 12 months since May, 2016, with a growth of 2.9% in the sciences and technology sectors.

The Non-Farm Payrolls report suggests that 287,000 different jobs were added in the last 8 months of 2016.

The Non-Farm Payrolls shows total payroll in the United States increased by 151,000 in August of 2016, which was lower than an upwardly revised 275,000 in July but below market expectations of 180,000.

Despite the lower addition to the job market, the unemployment rate remains largely unchanged from the past several months.

This is a good thing, as a strong job market means that inflation rates will stay largely unchanged as well.

The stronger a job market is, the lower the inflation rates stay, and the better mortgage rates tend to react.

What about the current inflation rates?

I’ve talked about the indirect effect of consumer spending on inflation, and how it ultimately influences the mortgage rates, but there are tons of other factors that determine the inflation rate as well.

As a rule of thumb, if the Fed Funds rate rise, you can expect the mortgage rate to go down.

Over the year, food prices increased 2.2%, energy prices fell by 9.6%, and all other items outside of food and energy rose by 1.3%.

This indicates the presence of increasing inflation, which can ultimately prove to be devastating to mortgage rates overall.

Need Money? Whether you are a first time home buyer, currently own, or have owned in the past – you can get money to cover your down payment and closing costs – see the best programs now…

When inflation occurs, everything, including the the bonds that were backed by mortgages, will lower in value.

Despite the slight bump in prices in San Diego, inflation has remained consistent over the last six years, and you can expect things to stay fairly consistent among mortgage rates.

Seeing as the inflation has been steady for the past six years, you can more than likely expect to see consistency among mortgage rates continue.

Despite this, disinflation and deflation can both have an impact on mortgage rates.

Efforts are still being put toward stimulating the economy to avoid disinflation occurring in the United States.

Due to steady inflations rates, efforts have been aimed at stimulating the economy to avoid disinflation taking place in the U.S

If a fall in oil prices takes place, then we can expect inflation to fall.

At present, crude oil prices is at $48.24 per barrel, which is a slight increase from the low of the last two months.

Despite this slight increase, mortgage rates and inflation rates seem to be maintaining a steady balance, though the Feds had previously advised that they were not sure how long this trend would continue.

Impact of the world economy on U.S. Mortgage rates

The impact of worldwide economies can play a huge role in mortgage rates in the United States.

As a rule of thumb, when the world economies weaken it puts a downward pressure on the mortgage rates.

This is largely due to the phenomenon of flight-to-quality, under which, if there is an economic climate of uncertainty or politically perverse conditions, people abruptly change their investment patterns.

Generally, all the investment moves towards less risky assets.

This is done to protect investments against loss.

Though the world economies are seeing upheaval in many areas, primarily in Europe and the Middle East, the investments in mortgage bonds has remained consistent and are predicted to stay as such in upcoming months.

At the present mortgage rates, and taking into account the past forecast - do you see an advantage in taking part in today’s mortgage rates or a disadvantage?

What about refinancing your home?

Up and Coming San Diego Neighborhoods

Revealed: 5 Reasons to Not Use Quicken Loans San Diego

5 Tips for Using Airbnb San Diego to Maximize Your Rental Returns
Posted in San Diego County Mortgage Update 2020 | 2021
no comments yet
Please enable Javascript to comment on this blog
Like or Share
Loading likes...